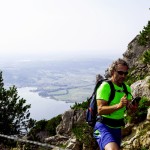 There is no way of knowing what the weather will be like. Not even in Italy. Being able to control your air conditioning system means you can cope whatever the temperature. The Truma iNet Box acts as a central control unit linked to the networked Truma devices.

Sensors recognise when the temperature deviates from a preselected level. If it is too cold, the Combi heater starts up. If the sensor registers that it is too warm in the vehicle, the air conditioning in your caravan or camper automatically starts.